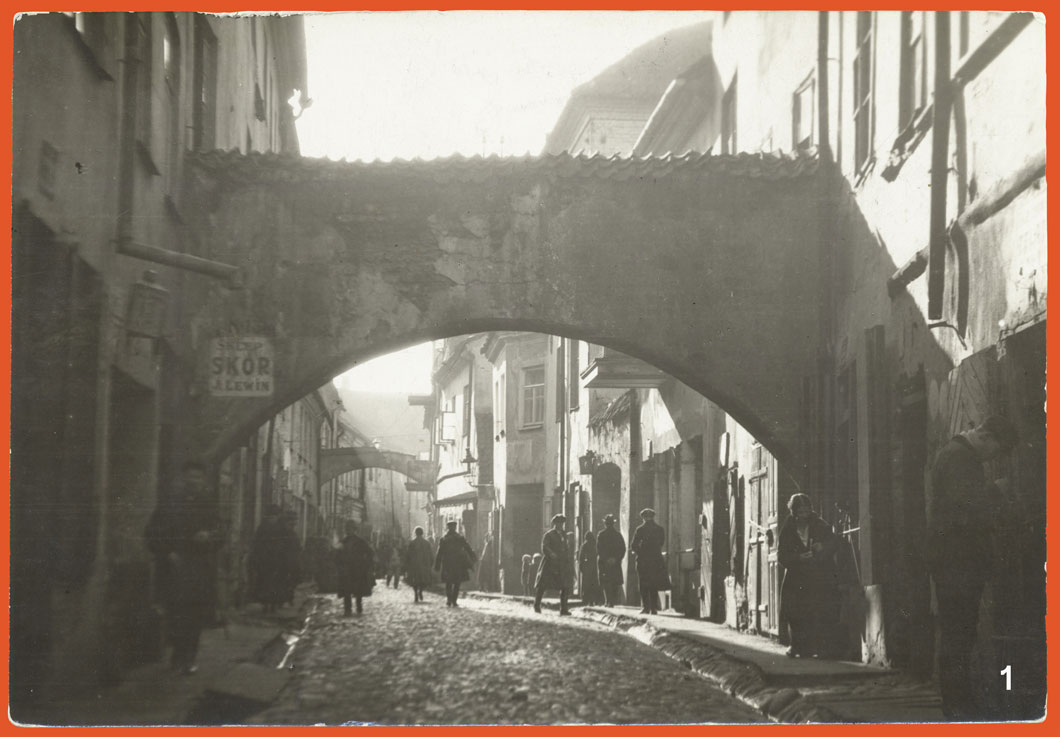 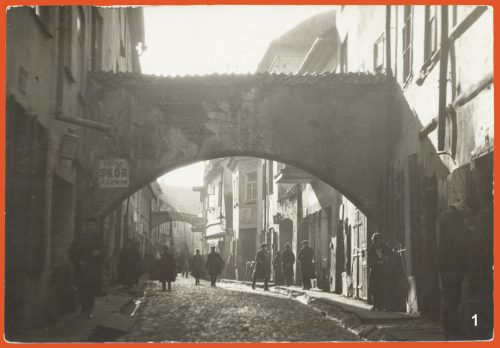 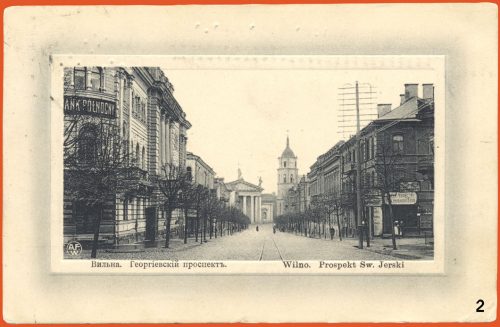 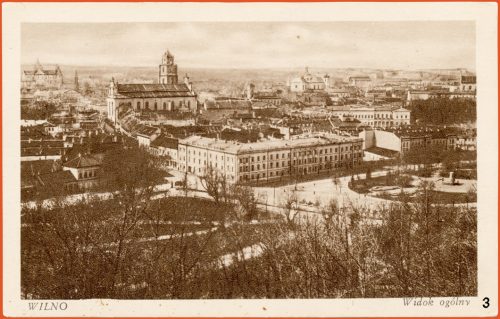 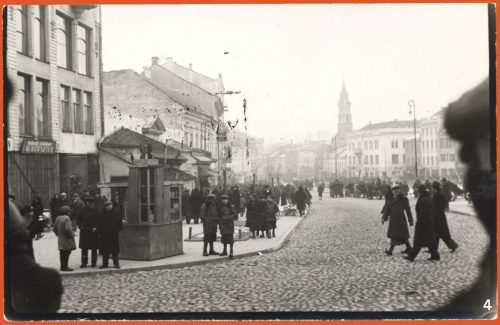 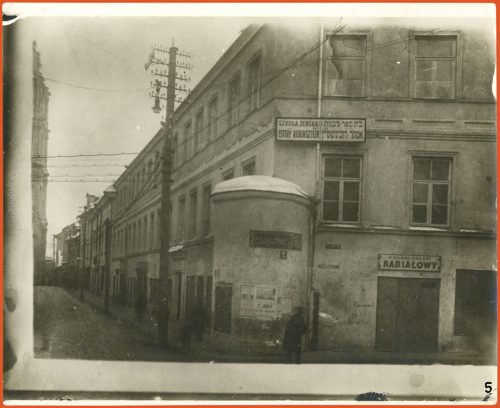 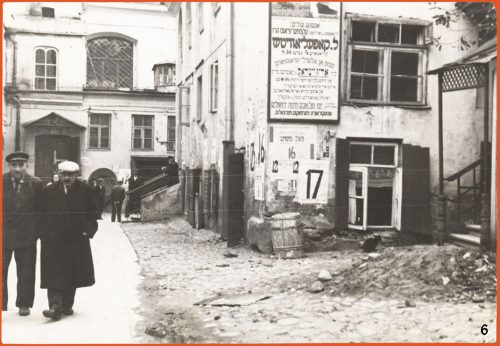 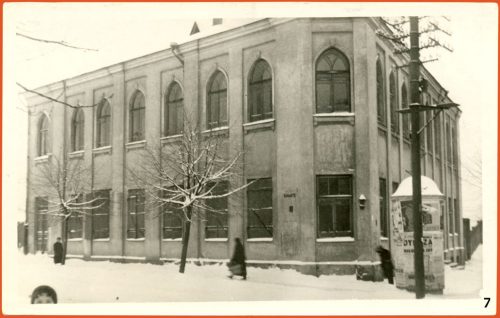 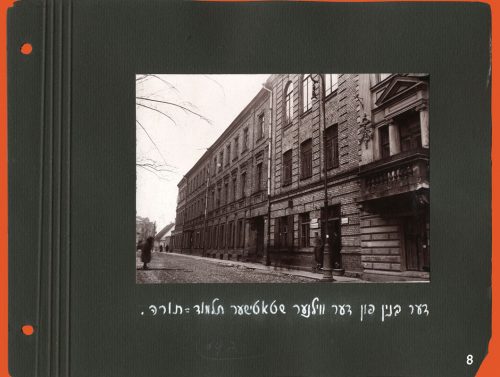 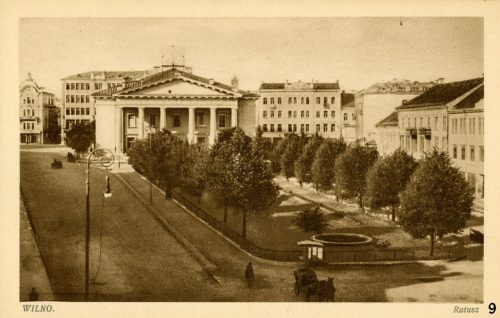 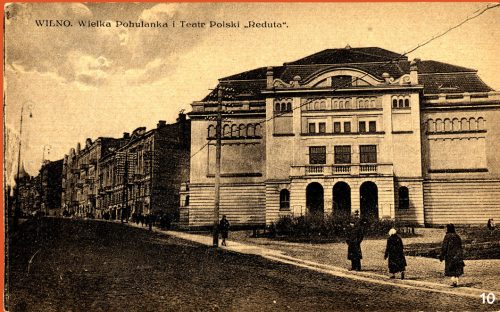 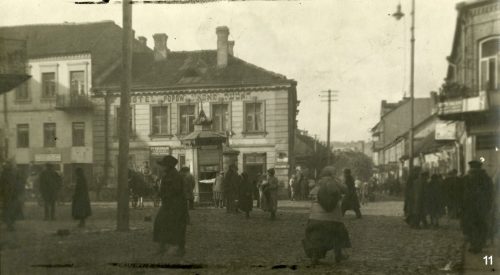 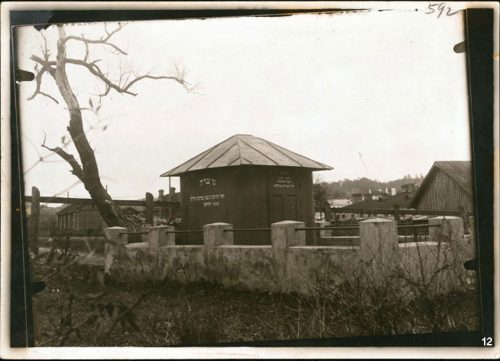 These photographs and postcards are of streets and buildings in Vilna created between the 1910s and the 1930s.

1. Photograph of an archway on Jatkower Street (Yatkever in Yiddish) in the Jewish Quarter. Jatkower Street, or “Butcher Street,” was known for the large amount of Kosher and non-Kosher butchers operating side-by-side. Photo by Alter Kacyzne

2. This postcard, printed Circa 1910, is looking down Georgy Prospekt Street (now Gedimino pr.), at the Cathedral Church and Tower.

3. This postcard is a panoramic view of the city.

4. Photograph of pedestrians on Wielka Street (now Didzioji). On the left is a store belonging to R. Bersztel.

5. This photograph was taken on Gaon Street (now Gaono). On the right, there is a sign above a door that says “Polski (Polish) Dairy Store.”

6. This photograph, taken in the 1930s, is of two men walking on a path in the shulhoyf (synagogue courtyard). On the building, there is a Yiddish poster advertising the services of shipping agent L. Kopelovitsh to emigrants to Palestine.

7. This photograph, taken in the 1930s, is of the Ramayles Yeshiva building. Ramayles was the first well-known yeshiva in Vilna. It was founded in the mid-1820s and operated until World War II.

8. Taken in 1936, this photograph is of the “talmetoyre” (traditional, tuition-free elementary school) at 6 Gdansk Street (now Islandijos), which housed a dormitory for 140 orphans, classrooms, trade school facilities, and a synagogue.

9. Photograph of the city hall on Wielka Street (now Didzioji).

10. Photograph looking down Pohulanka Street (now Jono Basanaviciaus). On the right is the Reduta Theater.

11. Taken in 1931, this photograph was taken on Zawalna Street (now Pylimo). Photo by Alter Kacyzne

12. This photograph, taken in the 1930s, is of the tomb of the Ger Tsedek (righteous convert to Judaism) in the Old Jewish Cemetery in Vilna, Poland. Walentyn Potocki was the son of a duke. He converted to Judaism and died a martyr’s death in Vilna. This tomb was revered, though the story of the Ger Tsedek may be only a legend. The cemetery was destroyed by the Nazis and the Soviets.