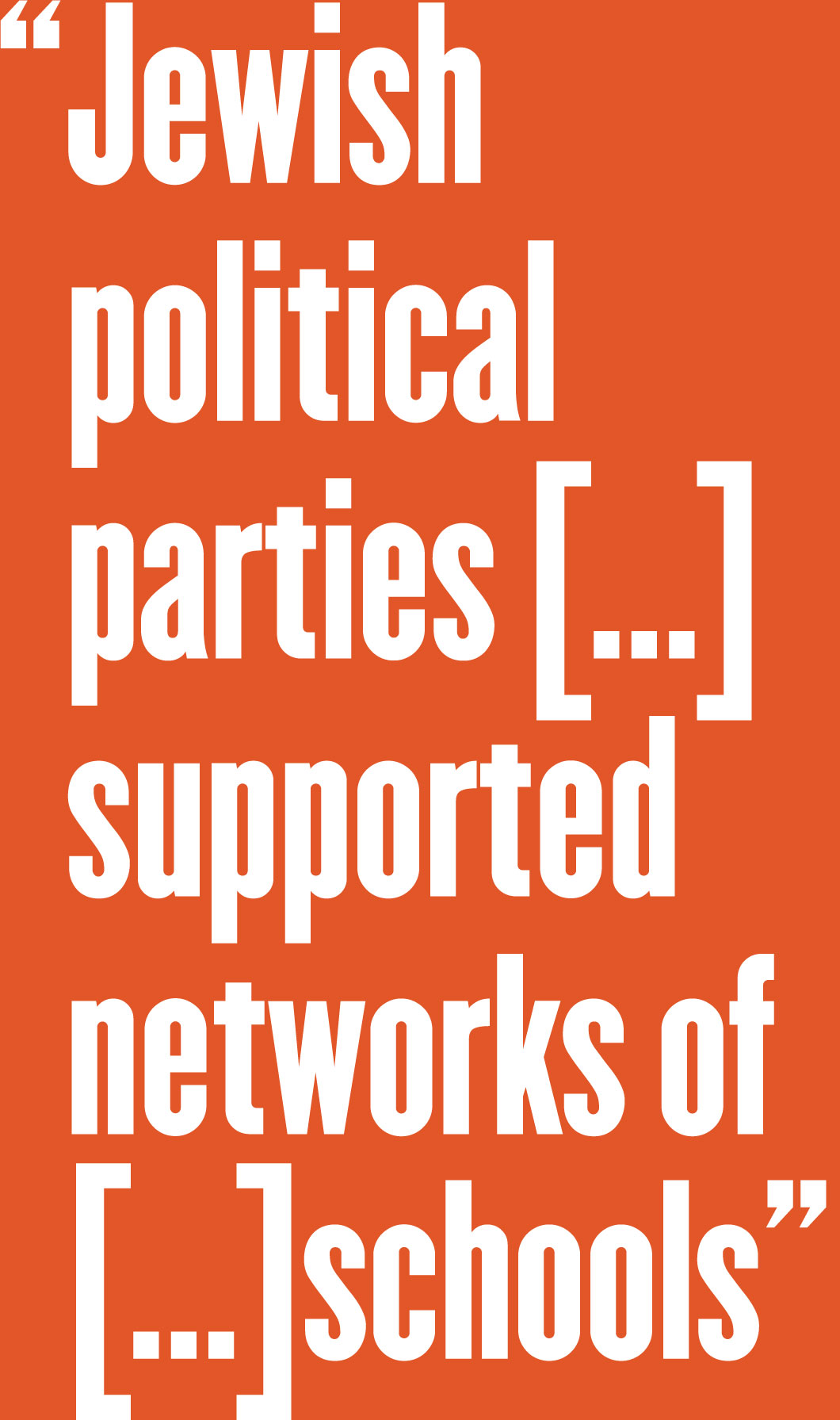 For centuries, Ashkenazic Jews in Eastern Europe spoke Yiddish in their daily lives and prayed and studied sacred texts written in Hebrew. Many were also able to communicate with local peasants in their own languages. Some also knew the language of the nobility or state officials.

By the mid-1800s, however, small numbers of self-described progressive Jews felt that Yiddish was a backward and limiting language. They wanted to replace Yiddish with the dominant language of non-Jewish society. By the turn of the 1900s, increasing numbers of Jews, including some graduates of state schools, were using the local dominant language. They could be heard speaking Russian both inside and outside their homes in cities such as Vilna and Odessa. They were heard speaking Polish in Warsaw and Kraków. Still, the overwhelming majority of Jews in Russia and Austria-Hungary continued to speak Yiddish as their native and primary language.

The rise of various forms of Jewish nationalism and socialism caused the decision about which language is appropriate for Jewish life to become highly contested. These divisions were at their peak after World War I. That’s when a newly independent Poland was home to the largest Jewish community in Europe. Between the two world wars, Jewish political parties across the ideological spectrum supported networks of private elementary and secondary schools. The schools taught in Yiddish, Hebrew, Polish, or a combination of the three. State law required Jewish schools to teach Polish language, literature, history, and geography, in Polish. These schools received little state support. So, they relied on the small tuitions paid by poor parents who were committed to the cause. The schools also depended on funding from political parties and contributions from Jews abroad.

TSYSHO was one of the larger networks of schools. It was mostly supported by the socialist Bund and championed a Yiddish future for Jews in the diaspora, the area outside of the Land of Israel. The more popular Zionist Tarbut network cultivated Hebrew as an everyday language. It also encouraged its students to move to Palestine. Both networks offered a secular education for boys and girls in a modernized Jewish language. Topics taught included science and mathematics, literature and the arts, physical education, and vocational training. The Chojrew network of schools for boys and Beys Yankev schools for girls took a different stance. Supported by the Orthodox Agudas Yisroel party, these schools focused on religious studies. They rejected both Yiddishism and Hebraism as movements that were at odds with accepted religious beliefs. They strove to uphold the traditional relationship between languages in Jewish society.

Yiddishist and Hebraist schools drew their largest enrollments in shtetls and cities such as Vilna in the multiethnic eastern border regions of Poland, where Polish language was least advanced among Jews. Jewish secular schools, especially Yiddishist ones, were often harassed by the state for their left-leaning sympathies, and their diplomas were rarely recognized for admission to state institutions of higher learning. Orthodox schools had greater approval by both the government and religious parents. Therefore, more students went to those Jewish schools. Orthodox schools were most popular where Polish culture was historically dominant and Hasidic life was commonplace. This included areas such as Warsaw in central Poland and Kraków in Galicia. These schools sometimes used Polish as a language of instruction for religious studies for students whose knowledge of Yiddish was weak. This occurred more often for girls.

However, the majority of Jewish children attended tuition-free state elementary schools. This meant that most Jewish students acquired Polish language and culture.

Kalman Weiser is the Silber Family Professor of Modern Jewish Studies at York University. He is the author of Jewish People, Yiddish Nation: Noah Prylucki and the Folkists in Poland (University of Toronto Press, 2011). He is also a co-editor of a new edition of Solomon Birnbaum’s Yiddish. A Survey and a Grammar (University of Toronto, 2015) and of Key Concepts in the Study of Antisemitism (Palgrave, 2020).