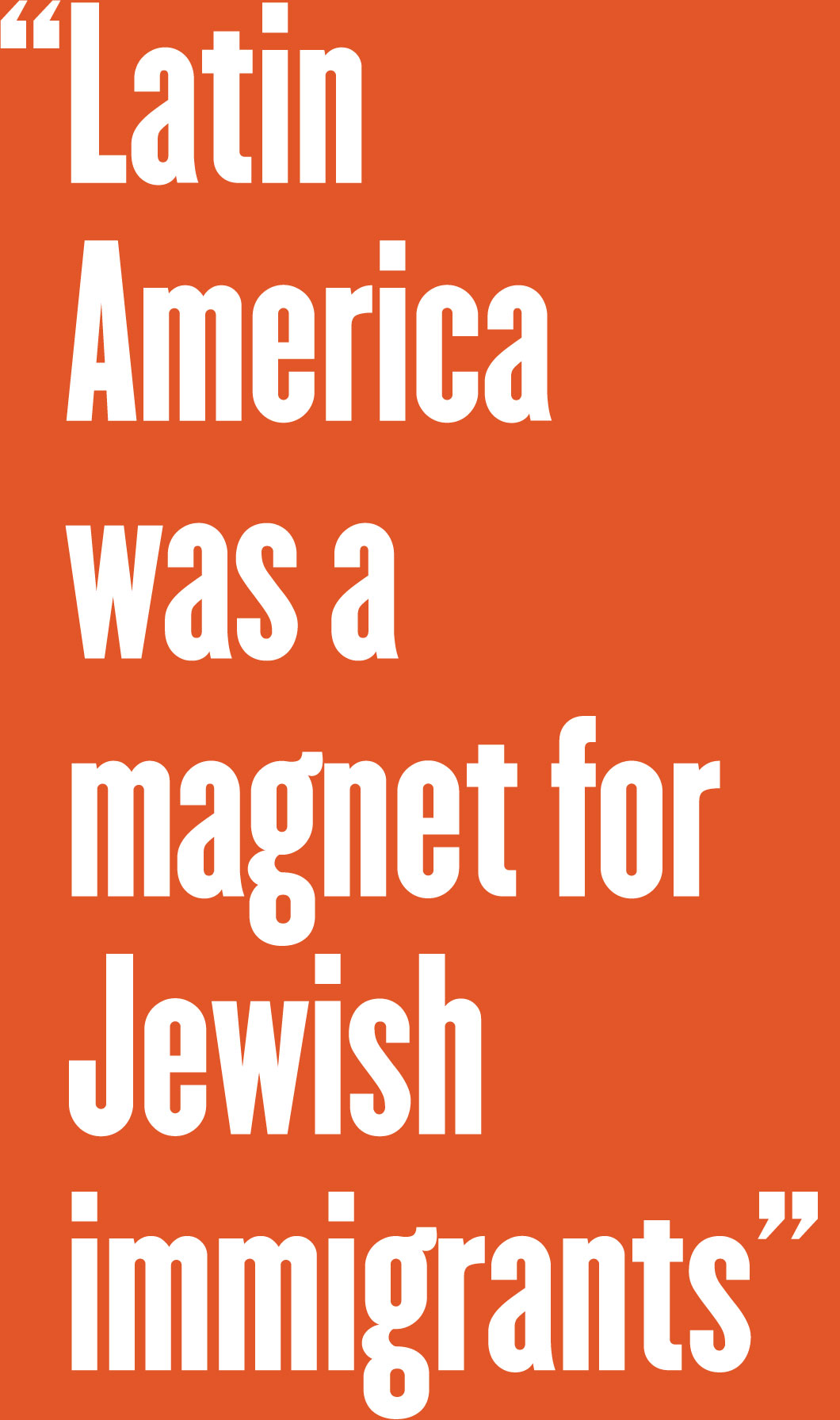 Latin America was a magnet for Jewish immigrants in the late 1800s and early 1900s. Cultural organizations, and individual philanthropists like Alliance Israelite Universelle and the Baron Maurice de Hirsch invested in a region called the Pampas. The Pampas is an area of land at the border between Argentina and Brazil. Land was cheap there. The population was poor, and the local government was eager to attract foreign investment.

Argentina wanted to urbanize the Pampas. But living in that area were people who were like cowboys. The people, called Gauchos, lived in the countryside and roamed all around the Pampas. They resisted any effort to develop the region. Argentina saw these Gauchos as “barbaric.” Therefore. the government wanted to bring in European immigrants such as Italians, Germans, and Jews. The government portrayed the immigrants as the antidote that would finally “civilize” the country.

The Pampas was such an attractive place at that time that the World Zionist Congress visited Argentina. At that time, it was considered one of three places in the world where the future Jewish state should be created. The other two were Palestine and Uganda.

Argentina, along with Chile, Bolivia, and Paraguay, later became popular landing spots for Holocaust survivors. These same countries were also prime hiding places for former Nazis fleeing Europe after the war. This so-called “rat route” allowed the Nazis to settle and change their identities to avoid facing their crimes. On occasion, these two populations even lived next to each other in the same neighborhoods.

Yiddish-speaking shtetl dwellers from the Pale of Settlement found other places like Brazil in Latin America equally compelling. In the 1920s, Rio Grande do Sul received numerous immigrants, who settled in Porto Alegre and elsewhere. Smaller Jewish communities were established in Uruguay, Peru, and Colombia, among other places.

Mexico and Central America (El Salvador, Guatemala, and Panama) also received poor Jews from places like Russia, Poland, Ukraine, and Belarus. They arrived by boat, often stopping in Cuba and other places in the Caribbean Basin. Jews from Germany and Hungary also came.

A deeply rooted and often unspoken antisemitism was a part of the atmosphere in the period in which the Ashkenazic Jews arrived. In 1919, a labor dispute in Buenos Aires resulted in attacks against Jews. And throughout the 1930s, governments like populist Juan Domingo Perón in Argentina borrowed anti-Jewish motifs from Nazi Germany for their political campaigns. A major terrorist attack against the Jewish Community Center (AMIA) in Buenos Aires took place in 1994. 85 people died, and dozens were injured. It was orchestrated by Iranian operatives.

Centuries before, Latin America had been a safe haven for Spanish Jews escaping the mighty fist of the Inquisition. They arrived secretly before and after 1492. The Inquisition had branches in the Spanish colonies, although they were comparatively less aggressive. The Inquisition headquarters were in Mexico City and in Lima.

When the Yiddish-speaking immigrant community came centuries later, they weren’t at all aware of the Spanish Jews at first. When the immigrants recognized the descendants of the Spanish Jews, the relationship between these two traditions was at first unfriendly. It took decades for them to forge a partnership.

Another significant Jewish wave of immigration to the Americas was made up of Ottoman Jews. They came from Syria, Iraq, Lebanon, Greece, and the Balkans. Their arrival coincided with that of Ashkenazi Jews.

Ilan Stavans is Lewis-Sebring Professor of Humanities, Latin America and Latino Culture at Amherst College and the publisher of Restless Books. His books include The Seventh Heaven: Travels through Jewish Latin America (2019).