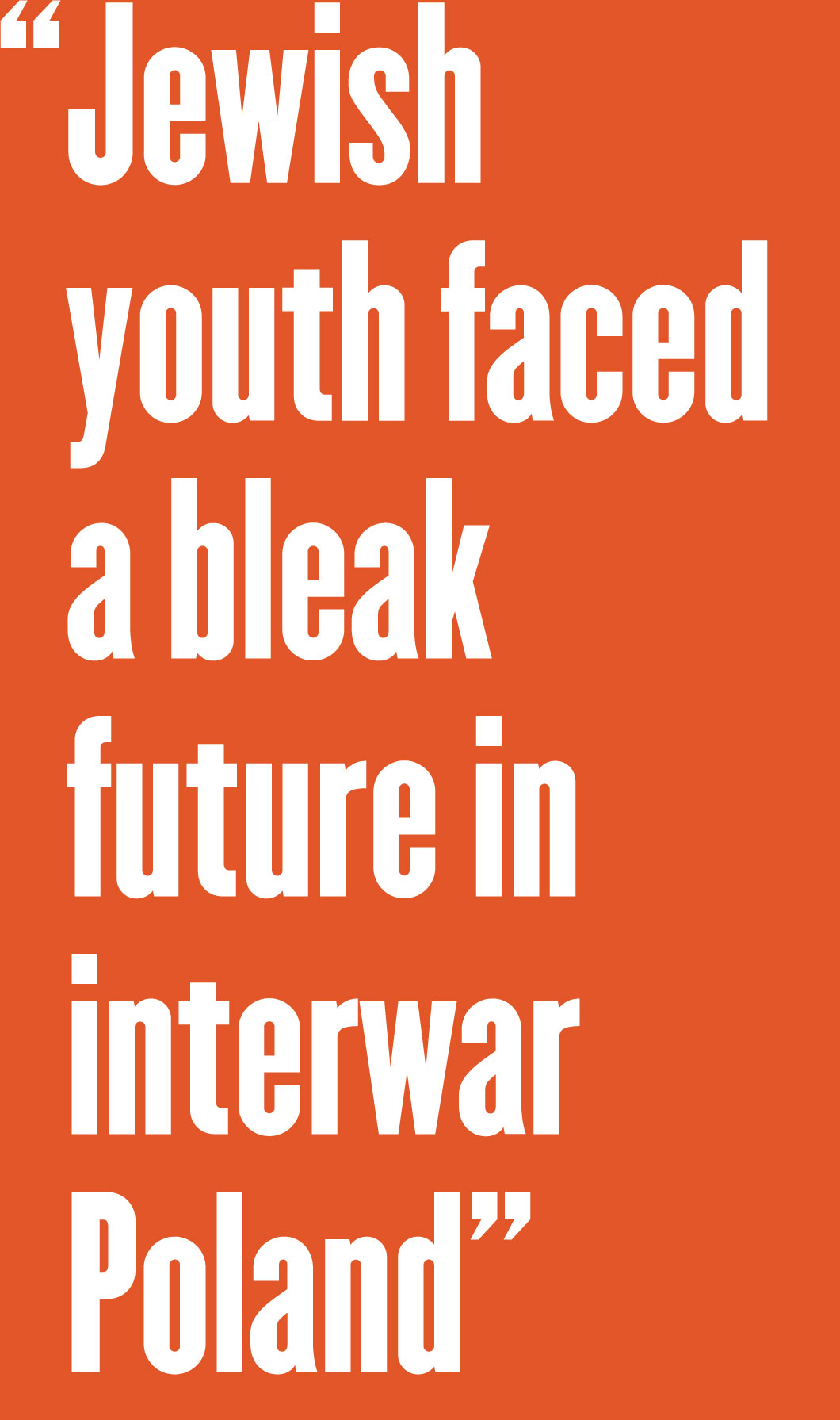 “If there was a ship that could hold 3 million human beings, the 3 million Jews of Poland would board it to escape to America”

Jewish youth in interwar Poland faced a bleak future because of a sluggish economy and mounting antisemitism. One solution was to emigrate, following in the footsteps of previous generations of East European Jews. Between the 1870s and 1914, roughly 2,500,000 Jews left the Russian and Austro-Hungarian Empires, and Romania. About two million of these Jews made their way overseas to the United States. World War I made it difficult to travel, so there were fewer immigrants during the war years. But afterwards, the number of migrants grew to prewar proportions. This indicates that many Polish and other Jews hoped to follow established migration chains to the U.S. As one report from the Hebrew Sheltering and Immigrant Aid Society (HIAS) hyperbolically put it, “if there were in existence a ship that could hold 3,000,000 human beings, the 3,000,000 Jews of Poland would board it to escape to America.”

400,000 Jews did leave Poland for various countries in the interwar period. But increasingly restrictive immigration laws in many countries made this path a difficult one. Most Americans did not want any more Jews from Poland. In 1916, one prominent author had already complained that real Americans were “being literally driven off the streets of New York City by the swarms of Polish Jews.” In response to such sentiments, the United States for the first time put a limit on the number of people who could enter the country. An additional feature of the 1921 law set annual quotas by country of origin. These quotas were designed to discriminate against the Eastern and Southern European regions that had been sending the most migrants. A 1924 law was even more restrictive. (Asians were banned altogether.) Some people managed to arrive anyway. Some were admitted within the quotas or as members of various categories that were exempt from the quotas. Or they entered illegally through Canada, Cuba, or Mexico. But overall, the laws were successful. Jewish immigration dropped sharply. The U.S. was no longer the obvious destination.

But perhaps Polish Jews could go elsewhere. Palestine was one alternative. The Zionist movement promoted Palestine on both an ideological and practical level. Young people, especially, were attracted by the prospect of reconstructing the Jewish nation as they rebuilt their own lives. The number of Polish Jewish immigrants to Palestine rose in response to America’s closing gates. Unfortunately, the path to Palestine soon narrowed as well. By the late 1930s, Palestine’s British rulers set tight restrictions on immigration. Alternatives such as Argentina, Canada, Brazil, Australia, and South Africa gradually set their own barriers against immigrants. Sometimes the barriers openly targeted Jews. In any case, the worldwide Great Depression dimmed economic prospects in many countries. Young Polish Jews were caught in a bind.

Daniel Soyer is a professor of history and Jewish studies at Fordham University. Among his books are (with Annie Polland) The Emerging Metropolis: New York Jews in the Age of Immigration, 1840-1920 (NYU Press, 2012), volume 2 of City of Promises: A History of the Jews of New York, winner of a National Jewish Book Award; and (with Jocelyn Cohen) My Future Is in America: Autobiographies of East European Jewish Immigrants  (NYU Press, 2006), an anthology of translated Yiddish autobiographies from the YIVO Archives. He is co-editor of the journal American Jewish History.