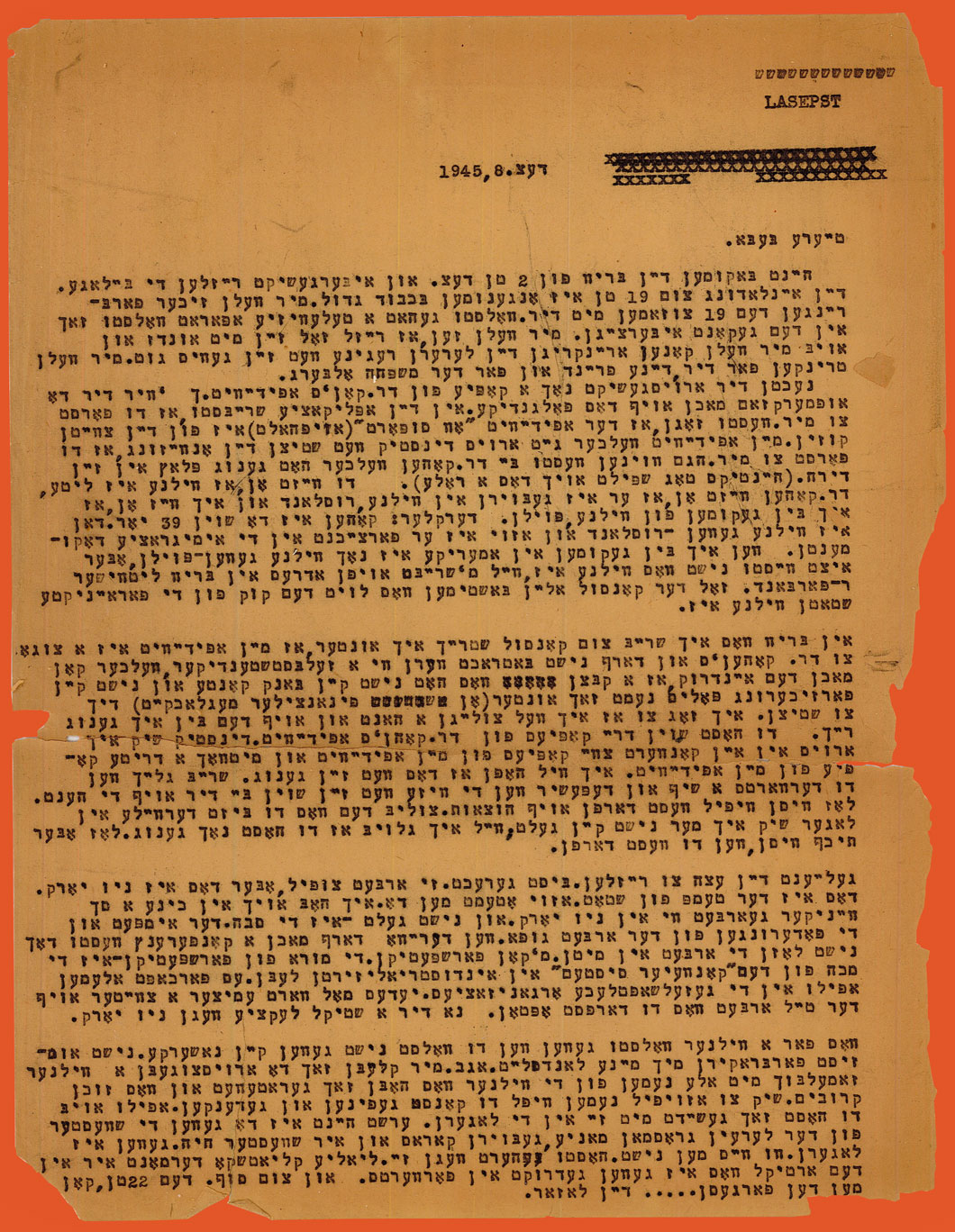 “I promise you I will make every effort, and in that regard, I am wealthy enough.”

This is a letter from Lasar Epstein to Beba, where he discusses details and hurdles they encountered in Beba’s application for a United States permanent resident visa. Full translation below.

Received your letter of Dec. 2nd today and forwarded your enclosed supplement to Reyzl. Your invitation to the 19th arrived with great honor. We will most certainly celebrate the 19th with you. If you had a television, you’d be certain of it. We’ll see to it that Reyzl is with us. And if we can get your teacher, Regina, to be there as it will be great. We’ll drink a toast to you, your friends, and the Olberg family.

I sent you another copy of Dr. Cohen’s affidavit yesterday. I’d like to draw your attention to the following: In your application, you wrote that you’re coming to me. Say that the ‘affidavit of support’ is from your second cousin. My affidavit, which I’ll be sending on Tuesday will support your declaration that you’re coming to me, even though you’ll be living with Dr. Cohen who has more than enough room at his place. (These days that is also a factor.)  You’ve indicated Vilna is in Lithuania. Dr. Cohen indicated that he was born in Vilna, Russia. And I came from Vilna, Poland. Clarify: Cohen has already been here for 30 years when at the time, Vilna was in Russia, and that’s how he is documented in his immigration papers. When I arrived in America Vilna was still in Poland. But now we don’t know where Vilna is. The letter’s address states: Lithuanian Soviet Union. Let the consul, in view of the United States’ judgment, decide what Vilna is.

In my letter to the consul, I am emphasizing that my affidavit is in addition to Dr. Cohen’s and need not be viewed independently, which can leave the impression that a poor man, who doesn’t have a bank account or an insurance policy, is assuming (without financial means) responsibility for you. I promise you I will make every effort, and in that regard, I am wealthy enough. You already have 3 copies of Dr. Cohen’s affidavit. On Tuesday I’ll be sending 2 copies of my affidavit in the same envelope.  And on Wednesday a third copy of my affidavit. I’m hoping that’ll be enough. Write immediately when you know your ship and telegram me when your visa is in your hand. Let me know how much you will need for your expenses. Because you are currently at camp, I’m not sending any more money for now as I think you have enough. But let me know right away when you need more.

I read your advice to Reyzl. You are right, she works too hard—but that’s New York. That’s the tempo of this city. That’s how we live here. I too worked a lot less in China than I do here in New York. And it’s not money that drives it. It’s the demands and thrust of the workforce. When YIVO plans a conference, you cannot just drop your work in the middle and create a delay. The fear of missing the boat is the lash that drives the ‘conveyor system’ in industrialized life. It grabs everyone, even those in communal organizations. Someone is always waiting on your part of the work. Take that as a little lesson on New York.

What kind of a Vilner would you be if you weren’t a nasherke /didn’t have a sweet tooth? It’s not for nothing that my countrymen/compatriots reject me.

By the way, we’re preparing to publish a Vilna anthology/compilation with all the names of those Vilner who survived and are searching for relatives. Send as many names as you can find and remember—even if you were separated from them in the camps. Just today the sister of Lererin Manye Grossman, nee Karas, and her sister, were here. They were in the camps. Where, we don’t know. Have you heard of them? Lialye Klatshko mentions her in the article that was in the Forverts. And finally the 22nd—could we ever forget it…..