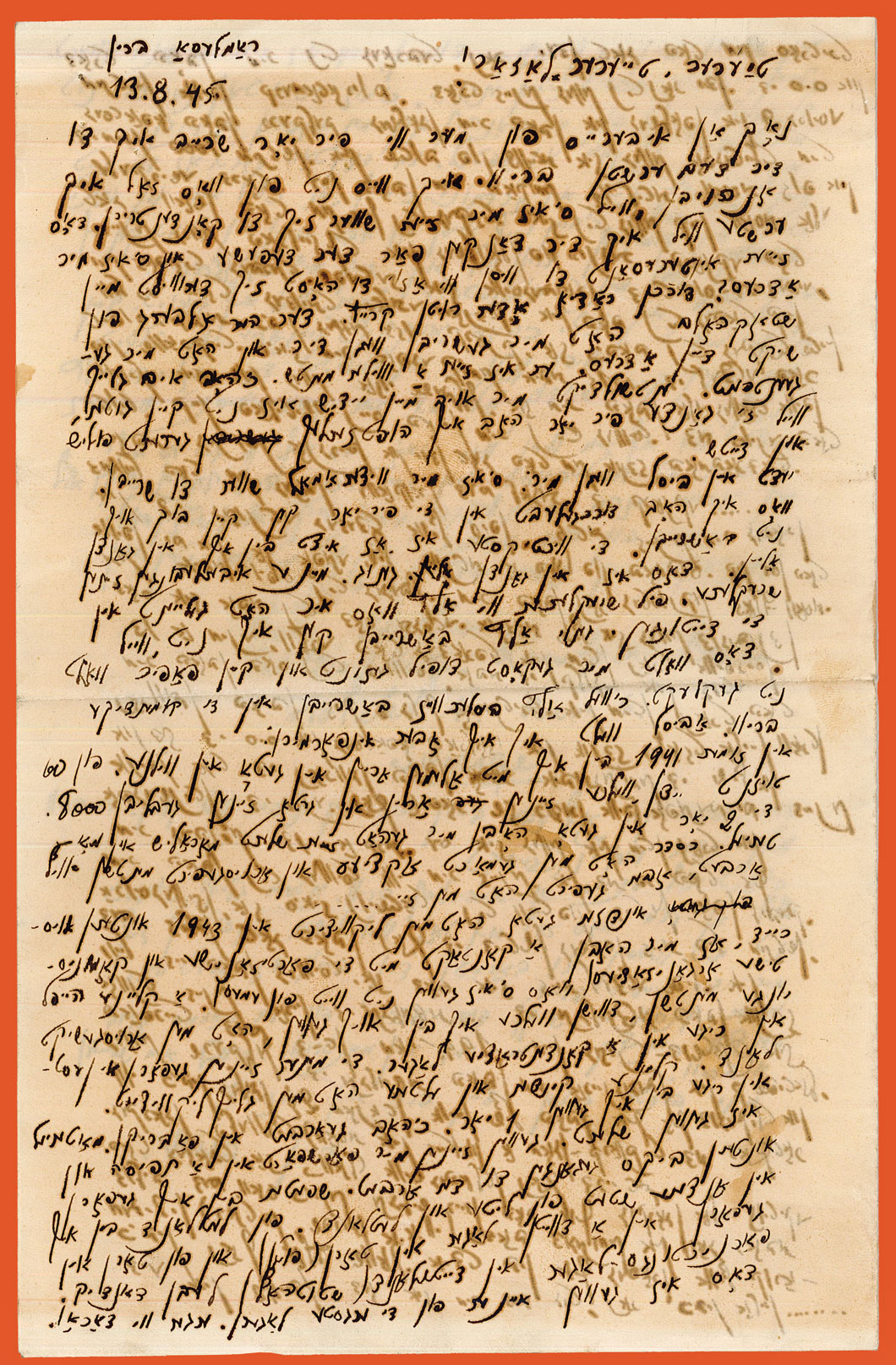 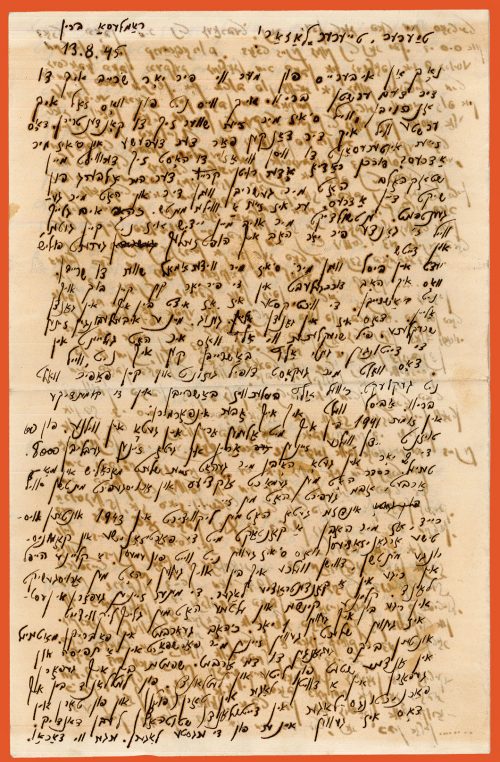 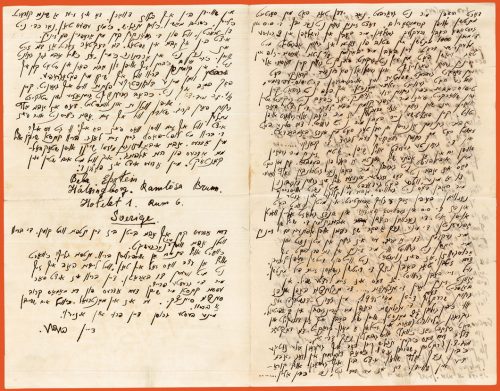 “After an interval of more than four years, I’m writing my first letter to you.”

First letter written from Beba to Lasar Epstein after he discovered she was in Sweden. In it, she summarizes her experiences during the war, her last days at the Stutthof concentration camp, and the aftermath of the war. Full translation below.

After an interval of more than four years, I’m writing my first letter to you. I don’t know where to start as it’s very difficult for me to concentrate. First of all, I want to thank you for the telegram and I’m eager to know how you got my address? Through the rabbinate or the Red Cross? Herr Olberg wrote me from Stockholm about you and sent me your address. He is a very nice person. I responded immediately. Please forgive me if my Yiddish is not very good. These entire four years I mostly spoke Polish and German.

Now a little about me: As said, it is hard for me to write about what I’ve been through these four years—no book could describe it either. The main thing is that now I am entirely alone. Meaning totally alone. Enough. My experiences have been horrifying. Much more horrifying than anything you’ve been reading in the papers. To precisely record, everything—I cannot because it would be detrimental to my health and no amount of paper would ever be enough. I’ll record everything in increments—in future letters. A little bit I will inform you:

In the summer of 1941, I entered the Vilna ghetto along with everyone else. Of the 60,000 Jews who were in the ghetto, 8,000 remained. We had a terrible 2 years in the ghetto—morally and materially. There were constantly Aktsyes—deportations that took people out to work, but in actuality, they were being taken to …

Our ghetto was liquidated in 1943 with the justification that we were in contact with partisan and communist organizations, which was not far from the truth. A small group of young people, amongst whom I was, were sent to Riga, to a concentration camp. The men were sent to Latvia. Little children and elderly were immediately liquidated.

I was in Riga for 1 year. I worked in factories. Provisions were despicable. We were locked up in a prison and went to work under the gun. Later I traveled to other cities in Lithuania and Latvia. From Latvia, I was sent to a camp in Torun (Poland) and from Torun to an extermination camp in Germany (Stutthof) near Danzig. That was one of the worst camps. Worse than Dachau.

There we did not work. Every day people were selected for the crematorium. Not only Jews were there. The SS and Gestapo beat us relentlessly. We slept in 2 big rooms—1000 people. The rooms were separated by an electric wire. For food, we were given a ½ liter of watery soup a day. There was nowhere to wash. There was no water. Everyone was infested with lice and swollen from hunger. The sick were immediately burned. Later a typhus epidemic broke out that lasted for several months. I didn’t get typhus, but I was so sick I couldn’t stand up, I was too weak. I lost over 15 kilos. The last couple of weeks were so horrific that we were all just waiting to die. No political news came to us. But the enemy began their attack, and we were bombed daily.

In the meantime, they began evacuating the camp. The sick….

The well were put on boats. For 6 days we sailed in an open vessel under the hail of bombs. There was absolutely nothing to eat. All we had was salt water to drink. But that wasn’t the worst of it. Our boat was attached to a mine that was due to explode in the middle of the night. We didn’t know it, but the smart and good Norwegians promptly became aware of it. In the middle of the night, the SS and Gestapo deserted us and left us alone to await our death. The Norwegians took over the boat and detached the mine. After a few hours of rowing on the open sea, we got to the shore. It was the middle of the night and we didn’t know where we were. In the morning it turned out to be Neustadt, not far from the German court of Lubeck. That same day the Germans were still shooting very many people because they knew that it was their last hurrah. In the evening the British appeared…the British freed us on the 3rd of May 1945. The state of my health was horrible. The Brits put me in hospital where I laid for 2 ½ months. I caught a chill on the boat and got pleurisy (water in my side) and a stomach ailment. The doctor said I wouldn’t last more than 3 days.) Because I spoke English, I received all the necessary medications, nourishment, etc. I gained weight but was still weak. I’m currently at a spa in Sweden.

I’ve only been in Sweden for 3 months. It’s a very beautiful spa. I read, practice typing, and study English. I have to do something in order not to think because my thoughts are enough to drive me crazy.

Currently, I’m in the hospital. The doctor says my side is still not right. But I think I’ll soon be well. I walk, I sunbathe, but I can’t yet go into town. I’ll send you a photo of me in my next letter.

I don’t know anything regarding my future plans. I have no trade. I finished gymnasia and studied medicine for ½ a year at Vilna University. But that was all before the war. I very much want to continue my education but don’t know if that’s possible.

Now I would very much like to know what’s going on with you? How are you doing? Airmail letters take a very long time. You can send me letters to my address. But bank transfers you must send to Herr Olberg’s Stockholm address. I will be in contact with him.

My address may change by the time your response arrives. But my letters will be forwarded.

I await a detailed letter from you. Write right away! I’m looking forward to taking your counsel about what I should do because sadly, I have no one to seek advice from. Your letter will now be my greatest joy.

Perhaps you can send me the address of my mother’s relative, Sender Sientski. He is in Montreal. I want to write to him.

Best regards to your wife and Izye!